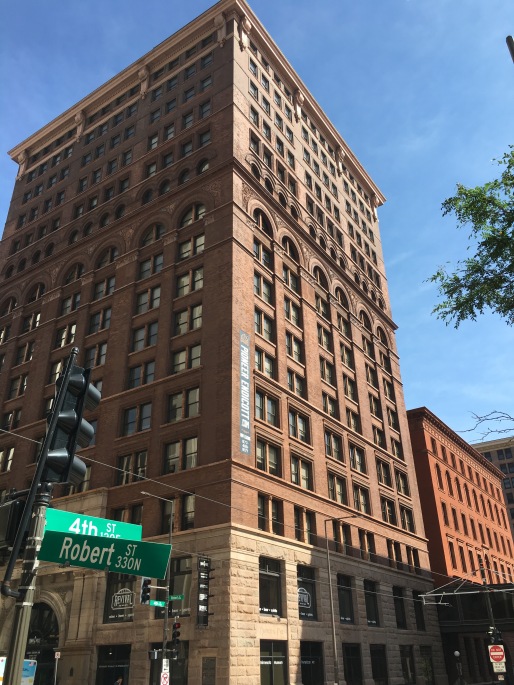 Two buildings with shared histories—physically and in the public mind—sit side by side in downtown St. Paul, until recently empty and without future plans. They are two of the city’s oldest architectural gems: the Pioneer and Endicott buildings.

They were constructed at almost the same time. When the Pioneer Building opened for business in 1889, it was the tallest building west of Chicago at 12 stories. Next door, the Endicott Building–technically two buildings, the Endicott and the Arcade–was going up. Completed in 1890, it was local architect Cass Gilbert’s first major commission in his hometown.

Both buildings are on the National Register of Historic Places, and are rare examples of what an office building was like in the late nineteenth century.

The earliest of the two intertwined structures, the Pioneer Building, was built to house the St. Paul Pioneer Press, a newspaper resulting from a merger of the Minnesota Pioneer and the St. Paul Daily Press in 1875. The new building comprised all elements of the newspaper, including the printing presses on its upper floors. When it opened, a visitor reportedly said, “It’s some kind of trick. They can’t get up that high.”

Indeed, it was the site of numerous firsts. Not only was it the tallest building around, it had the nation’s first telephone answering service. It had Northwest Airlines’ first ticket office, and the beginnings of Ecolab in its basement, where M.J. Osborn started putting together a cleaning compound called Soilax, according to Woodrow Keljik in “A history of the Pioneer and the Endicott Buildings.” Keljik lists two other “firsts” for the Pioneer Building: it was “the first building in the nation to employ glass-enclosed elevator shafts; it was the home of our state’s first commercial radio station, KFOY, in 1920.” 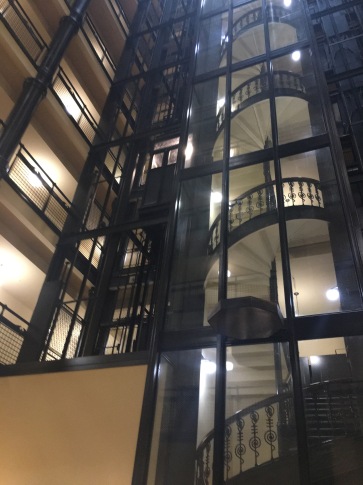 Somewhat less noteworthy, Keljik says, is the fact that in the mid-20th century it housed the city’s first massage parlor.

The Endicott surrounds the Pioneer Building in an L-shape, its two parts connected by an arcade. It is six or seven stories tall, depending on how one counts the basement, which rises one-half story above grade.

Moffatt’s Castle, a “hotel of sorts,” preceded the Endicott on the site, according to Keljik, and many refugees of the Sioux War in 1862 were taken there for treatment. 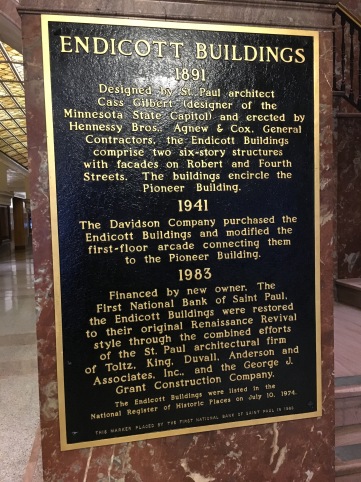 The Endicotts were a Boston family who owned a chain of dry goods stores and wanted a new store in St. Paul. Jeffrey Hess and Paul Clifford Larson say in St. Paul’s Architecture that Henry Endicott was Cass Gilbert’s greatest patron, and that the Endicott Building was the first of Gilbert’s projects to gain national notice. Gilbert and his partner moved their offices into the Endicott Building and kept them there as long as the partnership lasted, until 1911.

Both buildings have remarkable interiors. The Pioneer Building surrounds an atrium or light court topped by a skylight, and has an elegant entryway with beveled glass. Its four elevators were run by human operators for many years, at least until 2004. The Endicott is unusual for its stained-glass-roofed arcade, a feature that was very “forward-looking” for its day, and now connects all three buildings. Gilbert later incorporated arcades in many of his other buildings, according to the Cass Gilbert Society web site. The one in the Endicott is “lavishly detailed in exotic-colored marbles, stained glass, and stone mosaic floor tile,” the site says. The Endicott “was the premier office building in St. Paul.” 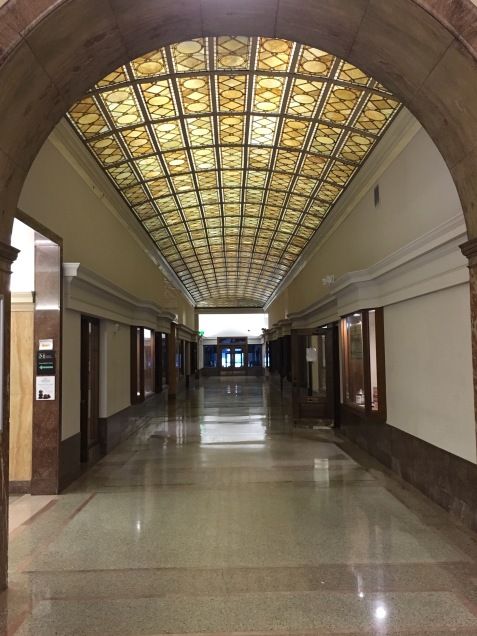 The Pioneer Building might take exception to that statement, however. John Mannillo, whose group owned the building in the late 1970s, said, “It was the who’s who of St. Paul for many years.” It has also been called the Wall Street of St. Paul because of the many prominent businesses officed there over the years.

Architecturally, the two buildings don’t have so much in common. Gilbert’s Endicott is Italian Renaissance Revival, “his great architectural love,” says the Cass Gilbert Society web site. It was his first chance to incorporate that style on a large scale.

The Pioneer Building is in the Romanesque Revival style. Its architect was Solon Spencer Beman, a Chicago architect best known for his Pullman community in the Chicago area, the nation’s first planned company town; he also built Chicago’s former Grand Central Station, several buildings at the 1893 World’s Columbian Exhibition in Chicago, the Pabst Building in Milwaukee, and multiple Christian Science churches around the country. 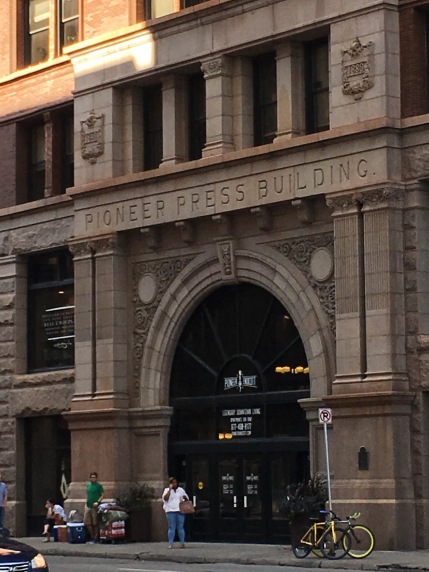 Beman returned 22 years later to add four stories to the Pioneer Building, using a new steel frame technique, at the behest of new owner Watson P. Davidson. The Davidson family owned and managed the complex of buildings (including the Endicott) from 1910 until the newspaper moved out in 1978.

A Guide to the Architecture of Minnesota describes the Endicott Building as, “The Northern Italian Renaissance palace reworked to accommodate a six-story office block. Severe, reserved, and slightly academic Beaux Arts.”

The Pioneer-Endicott buildings shared architectural quality, say Hess and Larson: “[Each was] among the finest achievements of their respective architects…” Keljik says, “By the end of the 1880’s and early 90’s St. Paul had become architecturally one of the most beautiful cities in North America.”

According to Hess and Larson, “The Pioneer Building probably owes its survival to local reverence to Cass Gilbert, whose Endicott Building wraps it on two sides.” 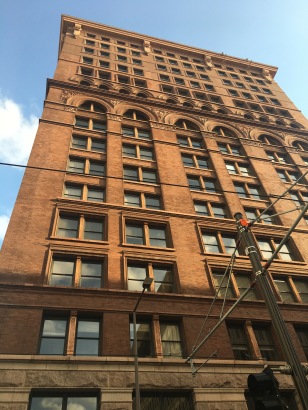 The buildings changed hands again and underwent extensive renovation that was completed in 1983. The $9 million restoration aimed to maintain architectural charm while adding modern efficiency, said Arnie Niemeyer in “Restoration Creates a New Community Asset.” Among other additions, the renovators cleaned the exterior; installed plumbing, heating and central air conditioning; installed new windows; restored building entrances and the arcade’s stained glass ceiling, which had been painted over with white paint; added glass walls on many floors in the Pioneer Building; and restored the U.S. Post Office to its turn-of-the-century state. The wooden doors that used to be portals into the horse stalls still stand in the basement. 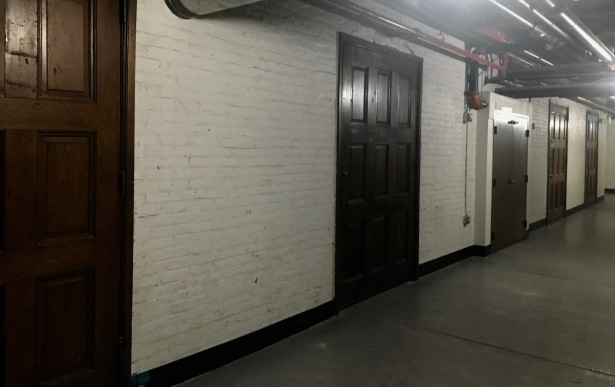 Niemeyer quotes an observer as commenting on the restoration: “The graciousness that has been missing for quite some time has been restored. It reminds me of what is being done in European countries. I like it all very much.”

As of November 2018 the buildings are part of the Pioneer Endicott apartments, the Minnesota Museum of American Art (which is expanding to occupy the first floor), Legacy Chocolates, 12welve Eyes Brewing, an urban boutique called Gypsy Moon, the Northern Yoga Center, a flower shop called “a pocket full of posies,” Details hair salon, and other offices. 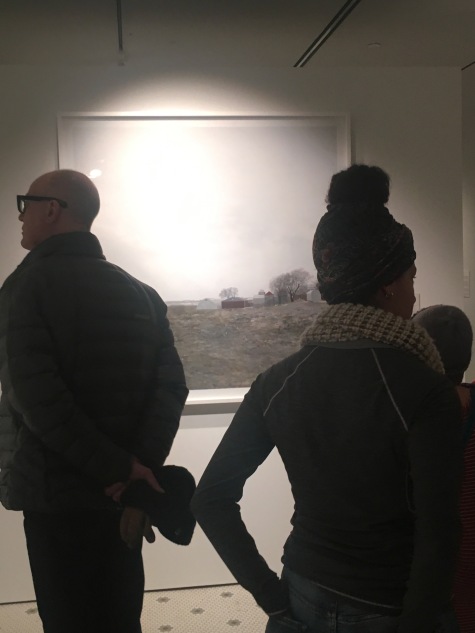 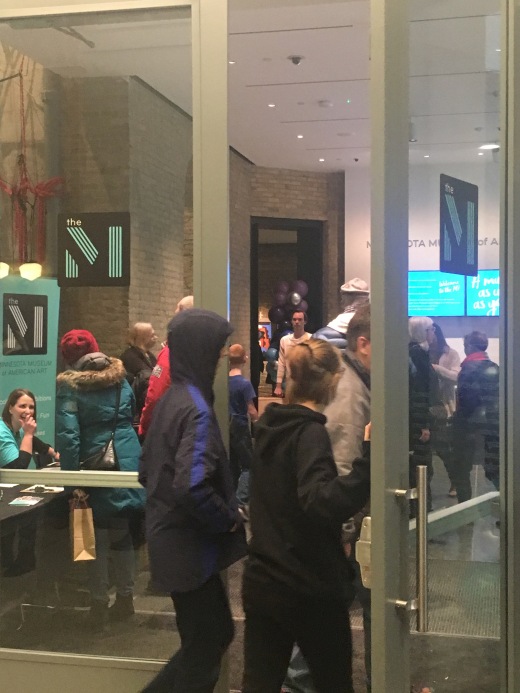