Como Park has weathered the years much as its home city St Paul has. Just as St. Paul was an outpost for the country in its early days, so Como Park was an outpost for the city, located out on its far edges. Both are centered around a body of water, Como by the lake and St. Paul by the Mississippi River, locations which have proved a constant in their slow but steady evolution. And, over the years, Como’s prominent features and contours have remained essentially the same, like St. Paul’s, sometimes weathering shabby times before being spruced up once again.

Take the Marjorie McNeely Conservatory, for example, its domed elegance echoing the domes of the State Capitol and St. Paul’s Cathedral. A modern-style stone and glass visitor center that connects the conservatory to the zoo opened in 2005. The 65,000-square-foot center boasts a cafe (Zobota Cafe), gift shop, classrooms, auditorium, and a tall-spacious, glass-roofed room that houses a simulated rain forest filled with plants and animals native to that ecosystem, called “Tropical Encounters.” The amusement park, Como Town, also underwent remodeling in 2005.

Visitors can still enjoy the familiar outlines of the original conservatory, built in 1914 and 1915, and the familiar rooms–the Sunken Garden, where the five annual seasonal flower shows bloom, the North Garden, and the Palm Garden, which houses more than 100 tropical palm and cycad species, some more than a century old, under the conservatory’s 64-foot-tall, 100-foot-wide dome. The familiar Fern Room was redone as part of the remodeling project that added the Visitor Center. (A separate story about the conservatory will follow soon in the next posting on this site.) 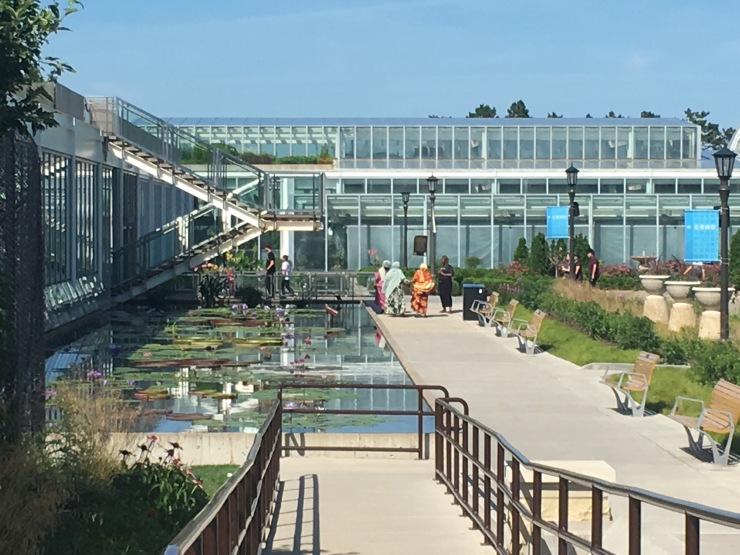 Behind the Visitor Center, the Como Zoo retains several buildings from its depression-era Works Progress Administration construction. The zoo’s history is one of slow evolution. As described by Andrew J. Schmidt in “Planning St. Paul’s Como Park: Pleasure and Recreation for the People,” it began in 1897 as a pen for a few native animals that arrived through unsolicited donations. “When St. Paul was given three deer in 1897, a pasture in the park was fenced, and for many years this constituted the city’s zoo. Until the mid-twenties visitors to Como Zoo would find deer, elk, moose and other native mammals here, together with some bison given to the city in 1915,” says a 1975 guide to the zoo. In the 1920s the Harriet Island menagerie moved to Como, largely because of flooding and pollution from the Mississippi River, notes Patricia A. Murphy in “Swamps, farms, boom or bust: Como neighborhood’s colorful history.”

The domed shape of the conservatory’s central room echoes a style of animal cages that characterized the zoo for many years. According to the 1975 zoo guide, this style originated in 1926 when someone donated a black bear to the zoo. More than the old fence would be needed for such a resident, so a cage was built from some old iron archways that had long been standing in the park. These were covered with strong wire mesh, making a structure with a distinctive rounded top.

The guide notes the years of the Great Depression were good to the zoo, when WPA labor provided its first permanent structures, including Monkey Island, the main zoo building and the bear grotto. The zoo got its first director, John A. Fletcher, in 1957, and he greatly expanded and improved it, perhaps most notably acquiring animals belonging to endangered species like Siberian tigers, gorillas and orangutans. Como Zoo was the first in North America to hand-raise Siberian tiger cubs successfully, a litter whose names were Kubla, Khan, and Genghis. The Primate House, the zoo’s first new building since 1937, opened in 1970 as a new home for the gorillas Don and Donna. 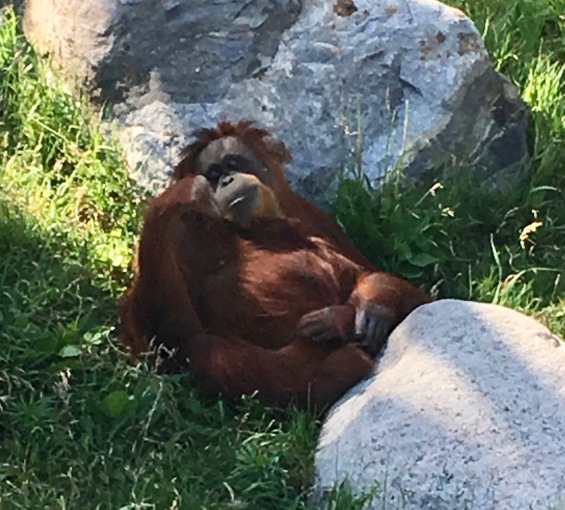 Como Zoo is open 365 days a year, and can offer a pleasant break in the colder months. A few animals are outdoors, like bison, horses, and a polar bear, and others can be viewed inside buildings, including seals, lions, tigers, giraffes and zebras. On a spring or fall day, crowds are sparse, the animals are very active, and visitors can gain appreciation of the zoo’s WPA-era structures unblocked by crowds and concessions.

Aside from the conservatory and zoo, Como Park itself has something of an interesting history. It was likely named after Lake Como in the Swiss-Italian Alps, probably by one of the first known settlers here, Charles L. Perry, after his birthplace. Perry grew potatoes along the lakeshore in the 1840s.

Como Park serves as an example of trends in American parks, according to Schmidt. At the time Como Park was established, the idea was to create a naturalistic, healthy refuge from the hustle and bustle of urban life. This happened in the second half of the nineteenth century, when “cities of all sizes followed the pattern of supplementing the old city-square parks with the more expansive and naturalistic landscape parks.” St. Paul was still a small town, but grew rapidly from 41,473 in 1880 to 214,744 in 1910.

Horace Cleveland, who drew up the plans for Como Park, said such landscape parks would have healthful effects, “stimulating recuperation of the wear and tear of life in the crowded marts of commerce,” cites Schmidt, noting Cleveland’s ideal was to show “the hand of man” as little as possible in the parks. There was some considerable resistance to purchasing the land, because of an economic downturn and because of a fear of elitism–some questioned whether poor folks, who couldn’t afford carriages, would have access to this park, which at the time was a considerable distance from the main part of town.

Land for the park was purchased in 1872 but not developed until 1887 when a board of park commissioners was appointed and the board retained Cleveland to design and develop the park. He left in 1890, however, before the park was completed, and Frederick Nussbaumer was appointed superintendent of parks. Nussbaumer, who was hired as a gardener when work on Como Park began in 1887, was trained in mechanical and civil engineering, botany, and landscape architecture, according to Schmidt. He served as parks commissioner from 1891 until he retired in 1922. While he agreed somewhat with Cleveland’s ideas about naturalistic parks, he “tempered his idealism … with the understanding that city residents pay for their parks; in return, they should be offered recreational facilities and attractive horticultural displays,” Schmidt notes. Nussbaumer developed Flower Hill, a floral display area with circular walks through tropical plantings and a pond known as the Aquarium; the Banana Walk, lined with palm trees during the summer; and topiary features, including the original Gates Ajar.

The focus of the park slowly shifted from naturalistic scenery to planned recreational activities, including band concerts, rowboats, and ice skating. The pavilion was built in 1895 and rebuilt in 1905 (the second version lasted 87 years, until 1992). The streetcar station, still standing on the northeast corner of Lexington Avenue and Horton, improved access to the park for people of lesser means.

Nussbaumer was influenced away from the naturalistic view of parks by the playground or recreation movement, Schmidt says. This was a social reform movement in the early 1900s: “Progressive Era reformers advocated government intervention to fix the problems that emerged as society transformed from primarily rural and agricultural to urban and industrial. Designers and planners decided that parks should provide organized activities for the urban working class, and so the park itself became a vehicle for reform.” Playgrounds, for example, were often built as part of this movement. Baseball fields and tennis courts were added to Como Park between 1910 and 1914, but the most significant shift toward planned recreation was the golf course, built at the end of the 1920s where Cozy Lake had been. Also in the 1920s, cars and trucks replaced horses for transportation and fewer people took the streetcars. Thus, Schmidt says, “With more mobility, St. Paulites no longer depended solely on city parks as an escape from urban life; they could simply drive to the country.” The era of the naturalistic city park had ended.

Como Park still has the features of both styles, though, and the people of St. Paul continue to take advantage of both. Through additions and renovations over the years, the park has grown to seamlessly meld the old and the new, much like the city of St. Paul where it resides.