James J. Hill is often associated with railroads, but his biggest contribution to Saint Paul was more mental than mechanical. The James J. Hill Center, formerly the James J. Hill Reference Library, has been called Hill’s “living gift” to the city and the most significant and visible civic legacy of its legendary founder. Yet, sharing a building with the Saint Paul Public Library at 80-90 Fourth Street in downtown Saint Paul, the center is much less visible than Hill’s residence on Summit Avenue; in fact the two libraries blend so seamlessly only the separate entries and signage indicate their distinct identities.

If one building, why two research centers? Hill had pushed the city to support the public library, urging its leaders to dedicate resources to that effort rather than to a huge event honoring him and his railroad in 1893: “I will add twice as much more [funding] and a good library can be put up at once,” he said (“Hill’s Library: The First 75 Years” by W. Thomas White). Though the city was unable to match his offer, he long dreamed of another library; he was a voracious reader and so understood all too well the need for printed resources in a pioneer city. According to his authorized biography by Joseph Gilpin (cited by White), Hill believed “in the average public library the average reader is well taken care of. The advanced student, the original thinker, the man engaged in investigation and research, the serious author, were relatively unprovided with proper tools.”

So it developed that the city’s public library and Hill’s private one were built side by side, which presented interesting challenges for Electus D. Litchfield, a New York architect who was the son of a former railroad president whom Hill knew. In 1912 Hill asked Litchfield to draft plans for the library building, and specified he wanted it simple: “My idea is to have good material and plain design, avoiding all useless ornamentation,” he said, as quoted in “Hill’s Library.” He got J. P. Morgan to send him a photograph of the Manhattan library for Litchfield to use as an example, to which the architect responded, “You have set us a high standard… but I shall do my durndest.”

In a 1920 article in Architectural Digest, R. Clipton Sturgis noted the challenges presented by housing two libraries in a single building. “In the library at Saint Paul Mr. Litchfield had a quite unusual situation, and the problems arising from it were peculiar to this one library, for it was a combination under one roof of a public library, built and administered by the city, and a reference library, built and administered by the generous gift of a private citizen.” Sturgis suggests the challenges lay in the disparity between a project funded richly and one funded by taxpayers demanding frugality. Hill’s desire for simplicity likely went a long way toward resolving that issue, however, and he pretty much called the shots on the building, as evidenced by Litchfield’s hiring. It’s worth noting that the Hill Reference Library part of the building was erected well before the public section, likely because two contractors were hired, one for each library. 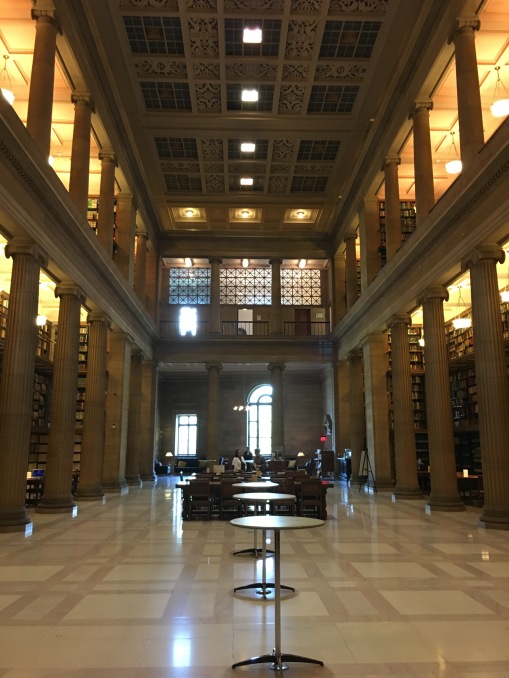 Sturgis admired the elegant simplicity of the building, and it has been one of Saint Paul’s most admired buildings. According to Sturgis, “This library exhibits the true economy of both plan and design. The plan is simple, straightforward, adapted to the definite uses of the two libraries, public and reference, contains no spaces that are not essential for work or for thoroughfare; and the exterior expresses this plan in a straightforward way, based on the simpler types of North Italian Renaissance, and reminiscent of the great palaces of Florence, Genoa and Rome.” He particularly praises the building’s U-shaped design with a courtyard overlooking the Mississippi River, and hopes it will become an open-air reading room, “a wonderful adjunct to the library.” He likewise praises the use of Tennessee marble for the exterior as “one of the most durable and also the most beautiful of our native marbles, excellently adapted for exterior work.”

In his A Guide to the Architecture of Minnesota, Larry Millett called the building “a high point in Beaux Arts architecture in Minnesota… Neither Cass Gilbert’s Capitol Building nor McKim, Mead and White’s Minneapolis Institute of Arts can compare with the design quality of this building.”

According to Robert M. Frame III in James J. Hill’s Saint Paul, the architectural style of the library building was “in keeping with the urbane Beaux Arts Neoclassical mode in vogue” at the time. Yet the interior of the Hill Center is even more striking than the exterior. It is a large, three-story hall, with books along the walls and long tables for patrons. “The room is dignified and well-proportioned,” Sturgis said. Today it conveys a sense of both the old and the new, with computers arrayed on tabletops amid the stack of books that evoke libraries of a century ago. “The reading room with its high ceilings is like an Italian Renaissance courtyard,” says Meier in “Curious and Wonderful Libraries.”

Hill died suddenly in 1916, after the exterior of the library was completed but before the interior was finished. His widow, Mary T. Hill, and their children continued his work, finished the project, and later contributed a $1 million endowment. Mary died one month before the grand opening ceremonies, so neither she nor he lived to see Hill’s legacy as a functioning library. 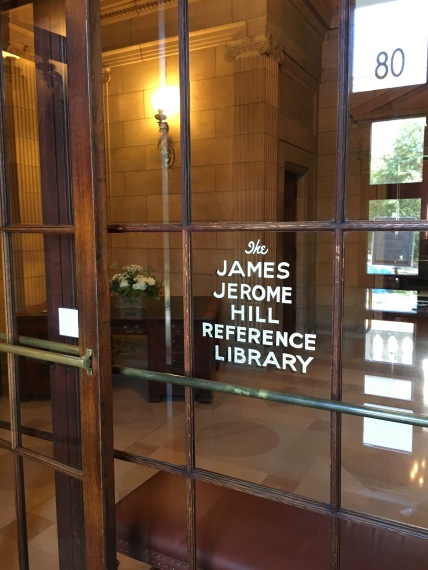 During the rest of that decade the library increased its holdings from 10,000 to 50,000 volumes, which would have delighted the voracious reader Hill. In the 1930s during the Great Depression, according to “Ahead for Business” (no author noted), the library expanded its public service commitment, helping people prepare for finding new jobs or starting their own businesses, and supplementing the strained resources of local colleges and universities.

It was the good fortune of the library to have long-term, dedicated head librarians during its early formative years. The first, appointed by Hill, was former St. Paul Globe editor Joseph Pyle, who was also Hill’s speechwriter and first biographer. Avoiding law and medicine, which he thought were already represented in professional libraries, and most works aimed at juveniles, Hill charged Pyle to collect “every work in other departments that had contributed something material and enduring to human thought, human knowledge or human progress.” Pyle died in 1930, but before that recruited his successor from the Library of Congress. Helen K. Starr served through the Great Depression and World War II. After she retired, she was succeeded by Russell F. Barnes, who had been at the Minnesota Historical Society and who remained at the Hill Library for 22 years.

The James J. Hill Center’s mission and usage over the years reflect the changing times. It was added to the National Register of Historic Places in 1975. In 1976 its focus was altered to the current emphasis on business.

To say Hill was a prominent citizen of Saint Paul is a gross understatement. As Frame notes, “’Saint Paul and the Northwest lost its most prominent citizen in the death of James J. Hill,’ declared the New York Times in 1916. Less than a year earlier a special governor’s commission unanimously selected Hill as Minnesota’s greatest living citizen.” Yet, interestingly, the library/center is one of only two buildings that ever bore Hill’s name, the first being a warehouse by the river where he first started out in business. The center’s unprepossessing exterior neatly reflects that somewhat out-of-character personal modesty, and stands as an appropriate monument to its founder: “The most important creation of each individual and each community is its own past,” Hill once said. 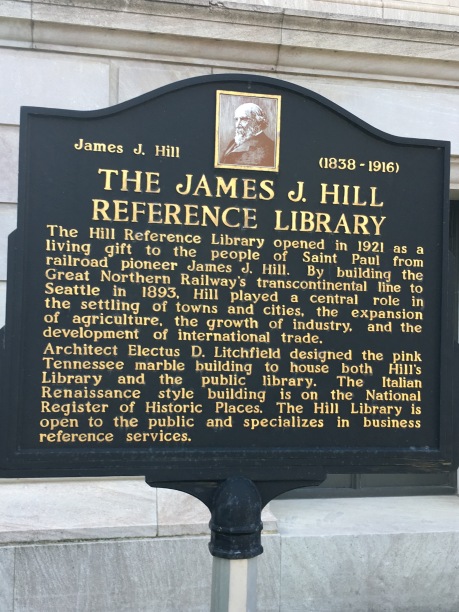 James J. Hill, the Empire Builder, might not understand all the technological changes taking place in his namesake library, but he would surely be proud of its 21st -century direction.

It’s free and open to the public from 8 a.m. to 4 p.m. Monday through Thursday, and anyone in the vicinity can stop in, if only to view the interior. Plus, it’s available for meetings and events: corporate events and client meetings, conferences and fundraisers, conference room rentals, and weddings and receptions.