Even though it’s a small town, Alnwick, England, has quite a few locations of interest both right in the town and in the surrounding area. It merits a visit of a few days at least. In addition to Alnwick Castle, The Alnwick Garden, the Playhouse and Barter Books, which are the four best-known attractions, some worthwhile stops are:

For history buffs, the Bailiffgate Museum is a must-see attraction. A community-run, independent museum staffed by volunteers and trustees, it is dedicated to the history of Alnwick and North Northumberland. It’s just down the street from the Castle.

The White Swan Hotel features as its restaurant the first-class lounge and other fittings from the S.S. Olympic, the twin ship to the legendary S.S. Titanic. The revolving door at the entrance to the hotel came from the Olympic, as did the staircase which can be seen on entering the hotel. Old photos of the ship when it was functioning line the walls.

Devotees of fishing will recognize the name “House of Hardy,” world-renowned for its fishing equipment. A museum of fishing tackle created there since 1872 adds to the interest. 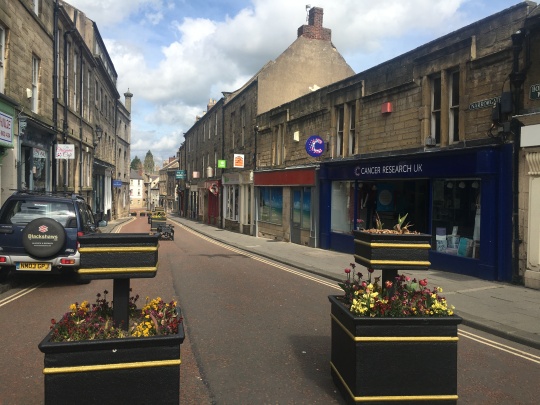 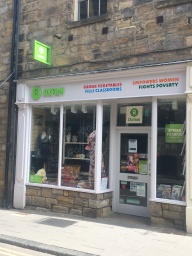 The High Street (main retail) is lined with charity shops in addition to traditional retail. The charity shops are delightful boutiques selling used items for various charities: Oxfam, Cancer Research, Mind (mental illness treatment and prevention), the Salvation Army, the RSPCA (Royal Society for the Prevention of Cruelty to Animals) and Cats Protection. Quite a few of my and my friends’ favorite purchases were from these shops. Several good coffee/tea shops line the street, too: Costa, Bailey’s, Origami Café, Grannies Tea Room and Bari Tea. 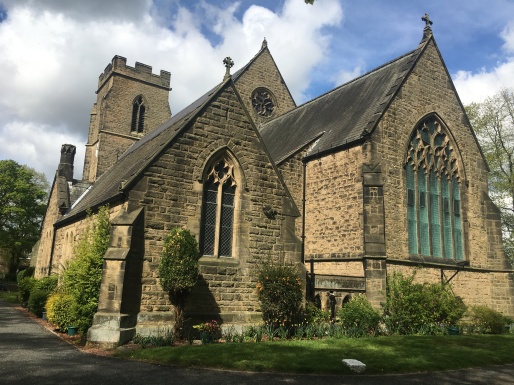 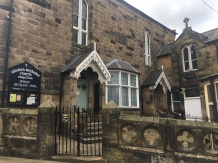 Seemingly every village and town in England has a castle at one end and a church at the other. Alnwick has not one but five historic churches: St. Paul’s (1846), St. Michael’s (15th century), St. James’ Church Centre (1894, home of Alnwick’s United Reformed Church), Alnwick Methodist Church (1786) and Alnwick Baptist Church (1840). St. Michael’s originated in the Saxon era and so dates back some 1,000 years, was rebuilt in the 14th and 15th centuries, and has intriguing features inside. St. Paul’s Church was originally built for the Church of England in 1846, but since 1982 has been the town’s Catholic church, while St. Michael’s is the home of the Church of England.

The Aln Valley Railway is rebuilding the branch railway line from Alnmouth to Alnwick through volunteers. It is a heritage railway, operating steam as well as other trains on designated weekends for passengers during the tourist season. 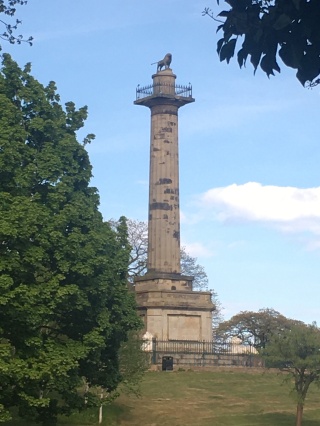 Across from Barter Books is the Tenantry Column, an imposing, 83-foot-tall monument to the 2nd Duke of Northumberland. It was built by his tenants in 1816 to thank him for reducing their rents 25% because they had endured hard times when grain markets collapsed after the Napoleonic Wars. A Percy lion tops the monolith. 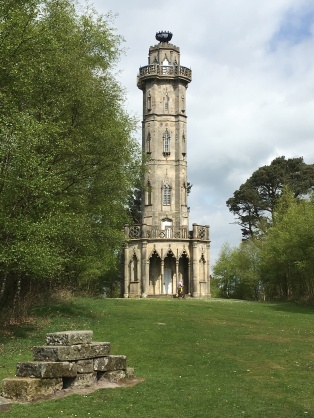 Hulne Park, about 2500 acres, is the Duke of Northumberland’s hunting ground and is open to the public at certain times and hours. It’s unspoiled because no cars or dogs are allowed (due to the wildlife), and it features several long walking routes and sites including Brizlee Tower. The area around Alnwick, like most of the country, is criss-crossed with walking paths for the public. 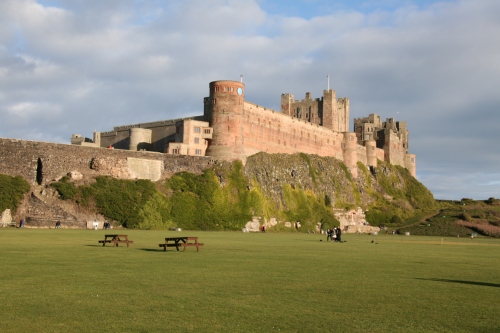 People who live in Alnwick also spend time in the surrounding countryside, especially the seashore. The Northumberland Coast is officially designated an “Area of Outstanding Natural Beauty.” Along the coast are Alnmouth, Craster (famous for its smoked kippers and just along the way from Dunstanburgh Castle), Bamburgh with its imposing castle, Lindisfarne or Holy Island (settled by monks in the 7th century, accessible only twice a day during low tides), Warkworth, Amble, and more. Day trips to Newcastle and Edinburgh are not uncommon. Earl Grey’s estate, Howick, is just a few miles away and features lovely gardens and a tea room (Earl Grey tea is named after one of the Earls). To the west is Kielder Forest, which has the largest dark sky in Europe, a magnet for astronomy buffs.

Alnwick has many stories and local heroes in its history. King Malcolm III of Scotland, the man who killed Macbeth, was killed in battle at Alnwick in 1093.

The town’s most famous hero is Harry Hotspur (1364-1403), a fierce knight, son of the first Earl of Northumberland, who is featured in Shakespeare’s “Henry IV, Part One.” His family, the Percys, have had dominion over Northumberland for more than 700 years (currently managing 100,000 acres in the county) and have been involved in many incidents of English and Scottish history. One Percy was involved with Ann Boleyn, one was suspected of being part of the Gunpowder Plot, and another brought news of the victory at Waterloo back to England.  More than one did time in the Tower of London. 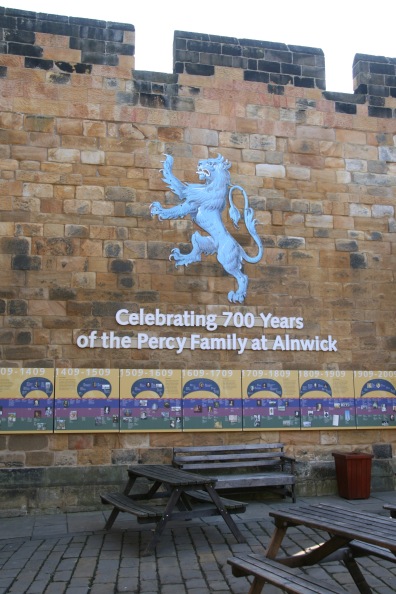 The Smithsonian Institution in the United States was founded by an illegitimate son of the first Duke of Northumberland, Hugh Percy; the Duke changed his own name from Smithson to Percy by Act of Parliament, in order to reflect his wife’s lineage. The Smithsonian founder was James Smithson, a renowned scientist whose will decreed if his nephew died childless, his money (he inherited a fortune from his mother), was to go “to the United States of America, to found at Washington, under the name of the Smithsonian Institution, an establishment for the increase and diffusion of knowledge” (Encyclopedia Britannica). 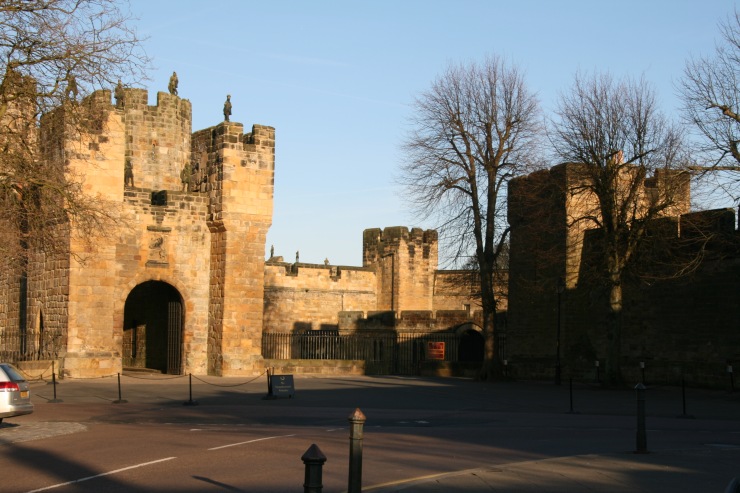 The Percys had other direct ties to the States, as George Percy, 8th son of the 8th Earl of Northumberland, a career soldier, landed in Virginia in April 1607, and was based at Jamestown, commanding the fort in 1608 when John Smith returned to England; he subsequently became Governor of Virginia in 1611, returning to England in April 1612. His daughter married John West who owned the land that became West Point. Also, the first Duke’s son, also named Hugh, fought at Lexington and Concord during the Revolutionary War, even though he opposed the policies that led to the war before he was sent to the colonies in 1774. He resigned his command in 1777 and went home.

Also worthy of mention as a big part of the Alnwick community is the Duchess Community High School, founded by the Duchess of Northumberland, Julia, in 1809. At the start it taught 20 girls; now it is a coeducational institution with more than 1400 students. Because state education did not begin in the United Kingdom until 1870, Duchess Julia was far ahead of her time.

Alnwick’s stories spring from thousands of years of history and are still being made today. Part of why I like being here is that it feels like I’m living in several centuries at once. Also, it has the feel of a small town but the broad-mindedness of a big city. I enjoy living without a car, walking to stores and pubs and restaurants and friends’ homes, taking the bus or train when I want to go somewhere out of town. There’s enough going on here to keep me pleasantly busy without feeling overwhelmed. All these features make for a very pleasant existence. 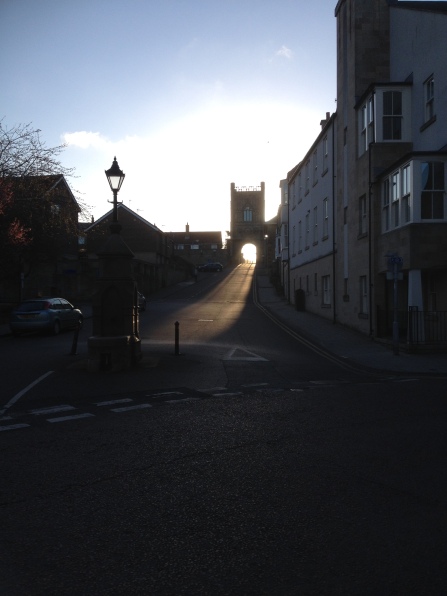 3 thoughts on “Alnwick, England: A town of many centuries and stories (Part II)”