This tiny 0.43-acre public area at the intersection of Ramsey Street and Summit Avenue is emblematic of St. Paul and its history. The decorative metal railing was salvaged from the historic Selby Avenue Bridge in 1989 and is more than a hundred years old. The retaining wall comprises stones from the High Bridge that was built in 1889 and demolished in 1985. Near the center of the park sits the majestic bronze sculpture of an eagle that formerly graced the New York Life Insurance Building in downtown, a building erected the same year as the High Bridge, 1889, and razed in 1967. The eagle is probably the city’s oldest public sculpture. 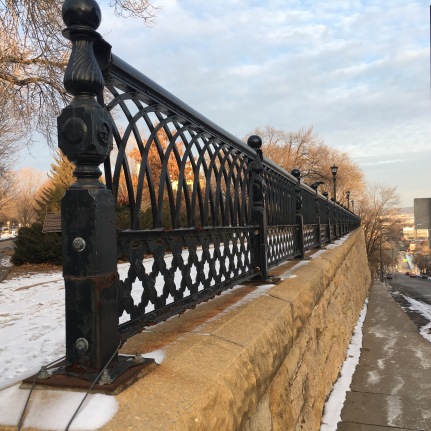 The park was renovated between 2004 and 2008 after more than a hundred years of benign neglect—it’s been called “Overlook(ed) Park.” Supporters purchased engraved paving stones for $150-225 that are artfully laid out surrounding the central sculpture. The engraved words on the stones express many varied sentiments.

The earliest known use of the site was for a hotel built in the late 1850s by Warren and Maria Carpenter; it was known as Carpenter’s Lookout but actually was named Summit Avenue House. The two lower stories of the five-story building were built into the retaining wall at the top of the bluff. The building apparently was destroyed by fire in the 1880s.

Starting around 1872, the debate about the need for public parks began and continued nationally and locally. As Donald Empson notes in On the Street Where You Live, “In an 1873 address to the St. Paul City Council, Horace W. S. Cleveland, the famous landscape architect who designed the park system of St. Paul and Minneapolis, lamented that homes had been built on the bluff side of Summit Avenue, obscuring the view of the river valley and downtown. He vowed that his priority would be to set aside at least one place along the hilltop for a public view.” Cleveland’s wish came true: Summit Lookout Park provides the only public view of the river bluff from Summit Avenue. 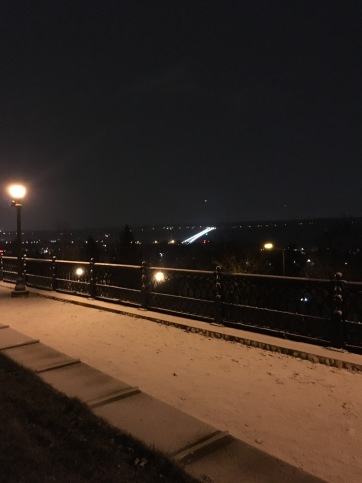 After the hotel ruins were removed, the city took possession of the land following the owners’ deaths, in the middle 1880s. Their children moved the hotel across the street to what now is Nathan Hale Park, according to Tom Zahn (“Once Upon A Time: Carpenter Park And Its Five-Story Hotel” in Ramsey County History), and later moved out in response to pressure to make Summit non-commercial. The city purchased the Lookout property shortly thereafter, around 1895-1897. When the city’s park board was formed in 1887, one of its first acts was to dedicate the land at Carpenter Park, Gabrielle Horner says in her article “Carpenter’s Lookout Park 1887” in The Summit. 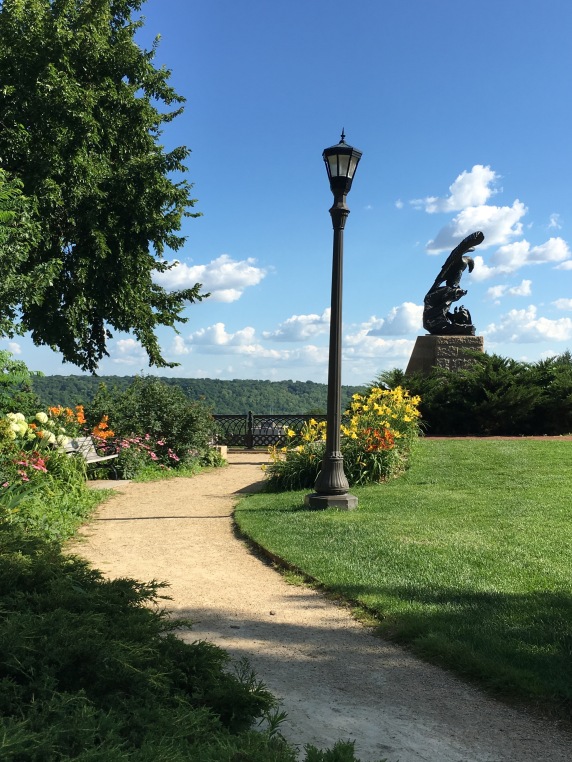 Around 1906 there were plans to connect this park with the site where the University Club now sits (it was built in 1912), via a broad, ornamental bridge to make the location even more scenic. The U Club lot would have become “Burbank’s Terrace,” according to Horner. She also mentions that around the turn of the twentieth century, the park was known for a large old oak tree that blew down in 1926. 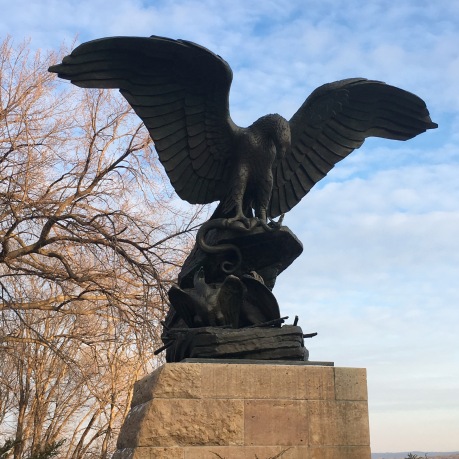 Meanwhile, when New York Life Insurance Company erected its building in downtown Saint Paul in 1889, architect Stanford White gave the commission for the crowning sculpture to two brothers, Augustus and Louis Saint-Gaudens. The eagle form that Augustus conceptualized and Louis carved in marble was cast as three bronze statues for the company’s frontier centers in Omaha, Kansas City and Saint Paul, as noted in a plaque at the park. Perched 34 feet high, it topped the three-story entrance to the eleven-story building. The 10-feet-tall, one-ton sculpture with a wing span of 12 feet is a powerful allegory of protection, the plaque says: “The majestic bird is poised on a ledge of rock, wings spread to shelter its nest of eaglets, its talons grasping a threatening serpent.” In 1967 when the building was destroyed, Empson notes, “the sculpture was saved from a salvage pile for $800 and installed nearby at ground level at Fourth and Jackson Streets. After nearly 30 years of neglect the eagle was donated in 1999 with the stipulation that it be moved.” That same year, Public Art Saint Paul bought it and restored it, and it was moved to the park in 2004. In that location, it constitutes the third edge of a triangle of late-nineteenth and early-twentieth century sculptures by its placement across Summit Avenue from William Partridge’s Nathan Hale and Paul Manship’s Indian Hunter and His Dog.

The eagle was relocated to the park in 2004, and upgrading continued until 2008 when the renovated park was dedicated.

With its new grass, gravel walkways, landscaping, benches, a stone seating wall donated by the Twin Cities Rotary Club, a drinking fountain provided by the Twin Cities Marathon, and a new irrigation system from the Toro Company, the park is now a more welcoming space than it has been in over 100 years. A number of groups and individuals in the neighborhood cooperated to make the improvements a reality. As the Summit Hill Association newsletter said, “One of Saint Paul’s most spectacular views of the Mississippi River Valley, it has been a long-neglected community asset.” Denise Beigbeder, who led the drive for the renovations, said, “Completion of the park celebrates the 30-year revitalization and reinvigoration of the Hill neighborhoods.”

Summit Lookout Park stands today a proud testimonial to Saint Paul, to the city’s history and to the people who live here. It is a picturesque microcosm of the urban area it represents.