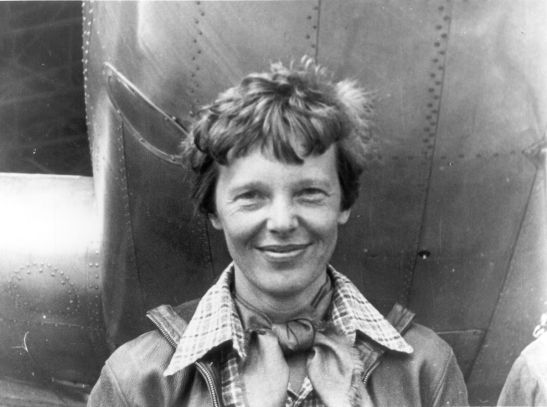 Over a hundred years ago, high school students in Saint Paul were enjoying Central High School’s new location at Marshall and Lexington. A new school building, designed by local architect Clarence H. Johnston, had been erected in 1912. Little did those students know that in their midst was a woman who would become one of the most famous Americans of all time.

Central High School has several claims to fame, including being the oldest high school in the state (formerly St. Paul High School, founded 1866) and boasting famed alumni like Gordon Parks, Charles Schulz and Dave Winfield. Yet the short presence of Amelia Earhart rivals the school’s other bragging points in importance.

Amelia’s family consisted of her mother Amy, her father Edwin, and her sister Muriel. Both her parents had grown up in Kansas, Amy as the indulged daughter of a prosperous Atchison family living on Quality Hill, Edwin as the hardworking son of a poor minister. Amy’s father disapproved of their marriage, and required the young attorney Edwin to wait until he was earning 50 dollars a month before he reluctantly allowed them to marry.

The Earharts moved to Des Moines, Iowa, in 1908 when Edwin was offered a permanent position in the claims department of the Rock Island Railroad. It took Amy a year to find a house she thought suitable, during which time the girls stayed in Atchison with their grandparents. Edwin initially prospered in the job, and the family did well financially during this period, enough that they could afford to spend four summers on Lake Okabena in Worthington, Minnesota.

Until this point, the two Earhart girls apparently had an idyllic childhood. They were very active and spent much time outdoors. They didn’t play with dolls, but had a .22 rifle as a gift from their father, which they used to shoot rats; he also got them boys’ sleds and footballs. He took them fishing and played “cowboys and Indians” with them. They were quite adventurous and built their own small roller coaster after seeing one at the St. Louis World’s Fair. They read voraciously and had a strong sense of justice and fairness, cultivated by their mother.

But, during the time in Des Moines, the family’s world began to crumble. As biographer Susan Butler describes it in East to the Dawn, “From a childhood spent with caring parents and grandparents, in comfort, surrounded by friends, all wants fulfilled, they would be plunged into the dismal ranks of broken homes and poverty. Des Moines marked the beginning of the end of Amelia’s childhood.”

Edwin had begun to drink. Heavily. Amelia’s sister Muriel writes in her biography, Amelia, My Courageous Sister: “… the shadows began to fall on our gifted father, and the amenities of life had to be sacrificed for the necessities of existence.”

In short, Edwin’s drinking eventually cost him his job, and “the reason for his release spread through the close-knit world of railroading,” Donald Goldstein and Katherine Dillon recount in Amelia. After a long job search, Edwin was offered a job as a clerk in the freight office for the Great Northern Railway in St. Paul. It was a decided reduction in status, but it was a steady job, and so the family moved to St. Paul in spring 1913. The journey to Saint Paul was disorganized and “lugubrious,” as Amy wept when they left Des Moines.

Edwin’s drinking continued to cause problems, unfortunately, and the family was in reduced circumstances. They rented a house at 825 Fairmount, but couldn’t afford the heating bills in cold weather, and so lived in a couple of rooms and shut the rest off. They had to scrimp on everything, such that the girls walked long distances to save money. When Edwin stumbled from a streetcar and was hit by an automobile, the $10 hospital bill set them back so badly there was no money for Easter outfits. According to Doris Rich in Amelia Earhart, “Amelia made Easter outfits for herself and Muriel, old blouses trimmed with new ribbons, and skirts from silk curtains stored in the attic. Thread, ribbons, and buttons were bought with $3.40 earned by selling empty bottles she and Muriel found in the cellar.”

In these reduced circumstances, the family endured ostracism even from relatives. Amy’s uncle, Charles Otis, was a respected man from a respected St. Paul family; George Otis had served as a state legislator and as mayor of St. Paul, and the family law firm had been established in 1857. Charles paid a short, perfunctory call on the Earharts and then ignored them. As it turned out, Amy’s brother Mark had undermined her relationship with her once-beloved uncle. Later it was discovered Mark had been mishandling the family estate, and likely hadn’t sent Amy money that was her due and that he told Charles he had sent.

Once, Muriel recounts, the girls were walking because they were one penny short of enough cash for a streetcar ride: “Homeward bound, laden with bundles and facing a biting wind, we felt an even more painful experience. Our great-uncle passed us in his car, and although he recognized us with a wave, he did not stop to offer us a ride.”

Both girls were enrolled in Central High School, Amelia as a junior and Muriel as a freshman. Amy wrote her brother Mark, “They [the girls] are both in the High School, taking the teachers course and Millie [Amelia] hopes to finish next year.”

According to the Minnesota Historical Society (“Amelia Earhart Found in St. Paul! http://discussions.mnhs.org/collections/2010/06/amelia-earhart-found-in-st-paul), a 1932 local newspaper article stated Amelia was a good student: “The record indicates that the woman who flew alone across the Atlantic ocean was more competent as a student of the German language than in other scholarly pursuits, although all her grades for the one year she attended Central were better than average.” The Historical Society’s file also contains a letter listing her grades for the two semesters and a letter from a former Central High librarian, Laurie Johnson: “I remember hearing Miss Dickson and others say that she was an attractive, friendly, red-haired teen-ager—not at all unlike her friends. Busy and popular…” She also played on the basketball team.

The newspaper article also says she attended St. Clement’s Episcopal Church and sang in the choir as a soprano. According to Butler, “Blocked from every other social outlet, the church provided Amelia with friends and activities: she joined the Altar Guild, was a member of the Junior Auxiliary, and sang in the choir. Each Sunday she and Marion Blodgett, a student a year ahead of her at high school who lived a block away on Osceola Avenue, walked to St. Clements together.” As members of the Altar Guild, they performed all sorts of tasks, whatever was needed, though Amelia apparently was less than assiduous at times: “Marion would remember the times when what Amelia had done had to be redone by someone else. Marion would also remember how much Amelia loved singing in the choir, and that the two of them sometimes giggled so loudly they drew a reprimand.”

While her exterior life appeared good, Amelia’s family life was still in disarray. Two critical events occurred while they were in St. Paul. One night Amelia was packing for her father to go on a trip when she discovered a bottle of liquor in his socks. As she was pouring the liquor into the sink, her father came in. He was “blazing with anger,” says John Burke in Winged Legend. “He approached the girl with his fist raised, but Mrs. Earhart caught his arm and he subsided in abject contrition.” Muriel says, “He nearly hit Amelia, and he had never before done such a thing.”

The girls were not involved in the holiday social events of St. Paul, but looked forward to a Twelfth Night dance at the church. The second critical event occurred when their father was to escort them, but came home very late and drunk. They had planned to meet two boys and have them over to the house afterward for refreshments. Mary Lovell recounts in The Sound of Wings, when Edwin arrived at home, “Muriel…burst into tears and retired to bed. Millie, steely-eyed and square-jawed, removed the Christmas decorations and pointedly cleared away the preparations she had made to entertain the boys.”

Amelia Earhart never drank alcohol. In Muriel’s estimation, “… the hardship that Amelia and I endured as adolescents made an indelible impression upon us and help to explain some of Amelia’s actions and attitudes in her later life.”

Shortly after the 1913-1914 winter, the family packed up again and went to Springfield, Missouri, where a job Edwin was promised never materialized. He returned to St. Paul and eventually moved back to Kansas, while Amy and the girls went to Chicago, where the family had close friends. Amelia graduated from Hyde Park High School in Chicago.

Despite her family woes and short time in Saint Paul, perhaps Amelia Earhart remembered St. Paul with fondness for her school and church experiences.

Note: The photos of Amelia Earhart are from Wikipedia via Google Images

2 thoughts on “Amelia Earhart in St. Paul: A brief stay was marred by sad times”